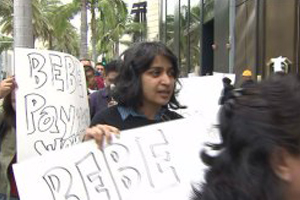 The demonstrators claimed that Bebe owes them tens of thousands of dollars in unpaid wages. They accuse Bebe — which has a store on Rodeo Drive — of wage theft.

“Not paying someone for their service, for their hard work is a crime — it’s robbing somebody of their salary,” the Garment Workers Center’s Marissa Nuncio said into a bullhorn.

Nuncio said the demonstrators work for a clothing manufacturer in downtown Los Angeles for the Bebe label. That factory shut down and reportedly failed to pay dozens of workers for as long as a month and a half, owning them more than $50,000.

“Under California law, a manufacturer and retailer like Bebe is responsible, just as a factory owner is for seeing that workers are paid legal and just wages,” Nuncio said.

Protestors presented a letter intended for the Bebe CEO, asking for immediate payment.

The demonstration shines a light on the bigger picture of wage theft, which, according to a UCLA study, is more of a problem in Los Angeles than any other major U.S. city.

Calls to Bebe’s corporate communications office seeking a statement were not returned.