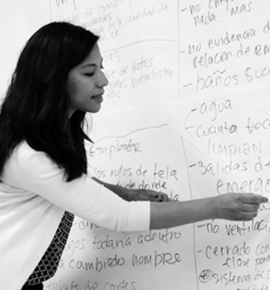 Marissa Nuncio joined the Garment Worker Center (GWC) in February 2013.  Marissa proudly identifies as a Chicana. She became aware of worker struggles growing up in Magnolia Park, Houston, TX, one of the oldest Chicano communities in Houston, surrounded by the City’s port and oil refineries.  As a young adult, she studied in Mexico three years after NAFTA was implemented and learned of its devastating impacts on workers and communities throughout North America. Her commitment to worker organizing was solidified there, and in 2001 she joined Sweatshop Watch, a co-founding organization of the GWC, where her role was to support the newly established Center and its first campaigns.  Inspired by work at the intersection of law and organizing, Marissa went on to earn her Juris Doctorate at Loyola Law School. She has represented unions, car wash workers, day laborers, and farmworkers. She is proud to have returned to the GWC to help frame its strategic organizing direction with its members and amazing staff. Marissa holds a Bachelor of Arts in Women’s Studies from Mount Holyoke College.  She is a member of the National Lawyers Guild. Marissa lives with her husband, mother, and two energetic children in East Los Angeles. When she catches a minute, she likes to make things; she bakes, sews, and makes jewelry.