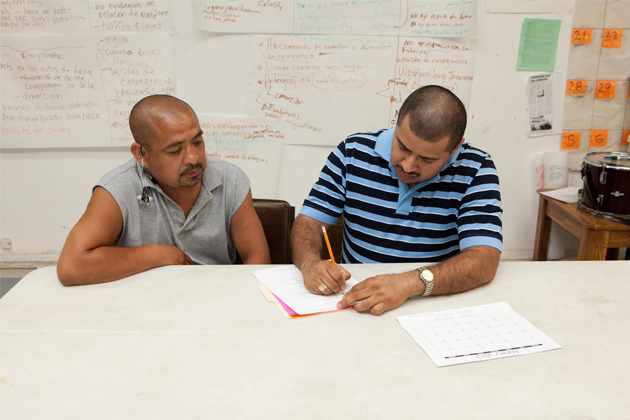 From Problem to Issue:
Since 1999, the Garment Worker Center has been building power with garment workers to improve working conditions and pay for the over 45,000 garment workers in Los Angeles. LA is the nation’s garment production capital, and garment is the city’s second largest manufacturing sector, yet workers continue to face injustice.

Just Wages
Workers cut, sew and finish garments locally, a workforce comprised primarily of Latino/a and Chinese immigrants, mostly women. Approximately 85% of garment workers do not earn the minimum wage and are instead paid a piece rate of between 2-6 cents per piece. Most garment workers work 60-70 hour weeks with a take home pay of about $300 dollars. Workers are not paid overtime and toil in unsafe, cramped, dirty, and poorly ventilated factories. They frequently develop physical ailments due to the fast-paced, strenuous requirements of the work, which stem from trying to earn a living wage while being paid mere cents per garment produced.

Our primary goal is to ensure low-income workers of color are leading the efforts to secure social and economic justice for all garment workers and every worker in California. GWC works to ensure garment workers are paid the minimum wage, paid overtime, and given breaks across the industry through local enforcement of workers rights.

Strong Laws and Implementation
Exploitation in this industry exists due to a scattered network of thousands of small factories, which often operate without proper registration or enforcement. Factories are hired by garment manufacturers who work for brands. Records of the web that is the supply chain are seldom kept. Factories and manufacturers both frequently avoid inspection by authorities or close shop when faced with wage claims leaving workers with little recourse.  Further, fashion brands that profit the most from sweatshop labor wash their hands of responsibility for the working conditions in their supplying factories, buffered by middleman manufacturers and legal loopholes.

We seek a state where policies address the needs of every worker and workers rights are held up. GWC works to strengthen policies and practices to ensure factories are abiding by existing laws. We fight for stronger regulations and implementation of those laws to ensure brands, as well as manufacturers and factories, are held liable for unjust working conditions and wage theft.

Brand Accountability
The Department of Labor has found that a number of major brands pay such low prices for their garment orders that the supplying factories they use are financially unable to comply with minimum wage requirements. Brands also continuously work with bad actors.

GWC is creating new models for worker power. We seek fashion brand accountability through agreements that workers can monitor so that workers are treated with dignity and respect.

Immigration Reform & Affordable Childcare & Housing Justice
Immigrant workers are the backbone of the garment industry. Factories owners often spread misinformation and fear of the systems in place to protect workers in order to take part in wage theft and exploitative practices. The low wages that garment workers are paid lead to uncertain childcare because of the high cost and lack of options. Low wages also lead to families sharing a one bedroom apartment, renting out bedrooms to strangers, and living in unsafe and unhealthy homes, or in order to keep a roof over their heads due to the lack of safe, healthy, affordable housing.

Our issues intersect with the need for immigration reform, affordable childcare options, and housing justice. We seek to improve the lives of all workers and their families.